It’s been three weeks to the day since we unleashed our latest effort and, despite what common sense would have us believe, people actually like it. We’ve received boatloads of feedback from fans and press alike and it’s a relief to hear the positive reviews. If greatness is defined by one’s ability to inspire creative metaphors, then we’re pretty darn great.

The record release party exceeded all of our expectations. Woodruff’s was packed to the gills with all sorts. I tell ya, there’s nothing warms the heart like a room full of folks screaming, “YPSITUCKY!” Thanks again to Andru Bemis and Scotch Bonnet for warming up the crowd for us. 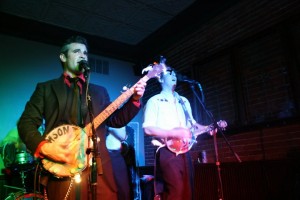 So what’s next on the agenda? This Saturday (6/25) we’ll be playing the Wayfarer Music Festival at the Magic Stick in Detroit. We’re going on @ 5:55pm, so get there early. After that we got nothin’ until we play Small’s in Hamtramck on July 22. We’ll also be playing some more festivals to round out the summer, including the Muddy Roots Music Festival in Cookeville, TN, over labor day weekend, joining the likes of Wanda Jackson, Wayne Hancock, O’Death, and a whole lot more. Check out our Shows page for the full schedule.

And now for the press section. To get things started, here’s a video we did for iSPY magazine before we took off for Belgium. A nice interview showed up a little while later.

Black Jake and the Carnies from iSPY Magazine on Vimeo.

And because we care more than we should what others think about us, here are some of the nice things people are saying about the new album:

“It sounds like summer in the way that homemade sweet tea tastes like it.” – Katie Milewski, Eastern Echco

“On their second full-length recording, the band’s fascination with the darker side continues, with a collection of cautionary tales about poisonous prosperity, diabolical pied pipers, mass hysteria and even an evil chicken.” – Roger LeLievre, annarbor.com

This entry was posted in Uncategorized. Bookmark the permalink.